Mix A thoroughly. Pour in B and mix thoroughly. Add a tbs to eat case and cook for 15 mins at 220 degrees.
Sprinkle with sugar while still hot.

This works out at less than the 3% per 100g of the original recipe and they are very nice muffins. 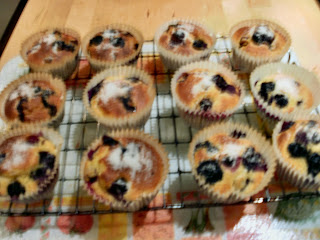 Try raspberries, blackberries or sultanas instead (soaked in rum)

Food for Thought for Friday -- Fat Free in New York 2

This was one I hadn't planned and we came across it as we walked back from The Metropolitan Musuem of Art.  Time was of the essence because our friends had a train to catch. Bad idea!


It wasn't the food so much as the attitude. I need a low fat option because of a medical condition but I was with friends who didn't..... I asked for a suggestion from the menu and rather dismissively the waiter said, 'Steamed chicken' (which is NOT on the menu) -- like what are you doing here if you can't eat!?
Then after explaining at length what I required, they brought my salad smothered in OLIVE OIL.
I said, 'Erm this salad has oil on it,' at which point I expected the salad would be immediately replaced and without question -- maybe even an apology??
Instead the waiter said, 'But it's good oil -- olive oil.'

You know the bit about the customer being right? Where'd that go? Another Italian place we went to later in our trip could not have been more helpful.

I ended up eating the soup and the grilled steak but no salad or vegetables and no dessert. Maybe I could have been more insistant, but there seemed to be some part of 'no' and 'fat' that didn't translate well at this restaurant and I have to say the others in my party were not that impressed either!

I recommend LATANZZI's instead! I explained what I needed and they provided a delicious bean soup, lean grilled steak and steamed vegetables which were perfectly done! And their selection of sorbets (I chose peach) made a perfect end to the meal. My husband had the mushroom ravioli which was wonderful (I tried a wee bit!) The wine was good, the pre-theatre service efficient and polite and the ambience just right. I even had an impromtu conversation with a lovely woman from New Jersey called Jeri :) -- who'd had gall stones! She tells me this is the restaurant they always go to for pre-theatre and it's always excellent. So don't just take my word for it!


It was Noel's 60th Birthday and a good place to celebrate it!
Posted by Oonah at 01:50 No comments:

Food for Thought for Friday -- Fat Free in New York

Impossible they said!!! You're going to starve :)


Easy they said!!! You can get anything in NYC. 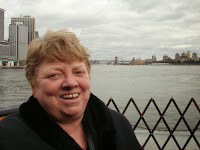 So how did I fare?
Much as I expected, it proved crucial to do some research. I trawled through the web looking at Menus before we left and even booked a couple of places where I knew they would have something to suit me. But BREAKFAST comes first every day and had I known when we booked the hotel that I would have dietary restriction, we would not have chosen to pay in advance.

The cafe at our hotel didn't have a buffet and a buffet would have suited me better. In addition they had a set menu if you paid in advance and that menu was very unsuited to my needs. Also the cafe is a franchise attached to the hotel and so the hotel really couldn't help -- it was up to the cafe manager and in fact the WAITRESSES -- because each morning we had a different server. On ONE morning, being a younger member of staff, she decided to ask the manager whether to charge extra since I was not taking the set option. The manager of course said yes! Well -- he would. None of the other waitresses asked him. They just brought me the porridge and the fruit salad I asked for with skimmed milk and that was that.

The set breakfast if you could eat it was more than adequate and the bacon was crisply grilled and the eggs and potatoes  fried in low cholesterol oil -- but of course I couldn't risk that. For me there is no good oil!  But even Noel said he wouldn't pre-pay again because what you lost was choice. He had to pay an extra small charge every morning just to have a latte instead of an americano.

The fact is that if you are in NY there are lots of places to get breakfast but The Park Cafe on 7th is a good one. Good food at any time of day really. In fact we even ate there one evening -- after our walking tour we were so tired we just 'stayed home' ;) I had soup and chicken breast and vegetables. Noel enjoyed his meal too and they had a decent selection of wines.

So thanks to all the waitresses who got me my oatmeal and fruit without question and made it a good start to a hectic New York day. :)

More NY eateries to follow in the next few weeks. 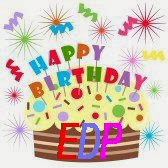 has now been putting out a

and I would like to thank and congratulate
all our staff
Past and Present
for that magnificent achievement.
Posted by Oonah at 04:03 1 comment: