Gall stones are not fun. In fact they are damned painful. And I have six of them. But as soon as I found out this fact – several weeks back -- I put myself on a very low fat diet because gall is produced as a response to fat and if you give the gall bladder nothing to do, you can be relatively – in my case entirely – pain free.

Now this entails cutting from the diet some things you might not expect – like most breads and lots of processed food especially processed meats such as sausages and corned beef. But there are some good alternatives. Weight Watchers do a low fat loaf and some French sticks are low fat. But if in doubt, look at the label and if it’s store baked I steer clear just in case. The crumb coating on fish fillets etc varies a lot too. I find some I can eat and others I can’t. Quorn sausages are low in fat and you can get trimmed lean bacon at M&S. Use a light spray oil whenever possible and invest in a good pan. A Slow cooker is a good way to cook as you can use cuts that do not have enough fat to roast, Skirt, Brisket, Shin of beef, Ham, Free range chicken etc.

Baked potatoes are good – just don’t add butter. Light cream cheese and chives, or beans, or tuna and parsley are good fillings and you can mash the flesh with just a little skimmed milk. I also find parmesan very useful because having such a strong flavour, you get a LOT of flavour for just a sprinkling of cheese – so I use that a lot these days with some black pepper and nutmeg on top and it’s great with low fat tomato based pasta sauces.

Sometimes it’s nice to have a treat you love though and so I have developed Bread and noButter Pudding. Whether you have gall stones or you’re just on a diet, here is the recipe. 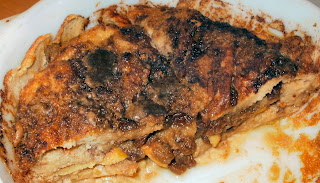 
A couple of handfuls of sultanas (or other dried fruit)


Ground cinnamon (I used it in each layer. Could be just on top…)


Finish with sugar and cinnamon and then pour the eggy milk over and squash down with a fork making sure that all the bread is soaked. It should be quite soggy! Cover and leave to soak for an hour or two or overnight in a fridge.

Preheat oven to 160 and cook for 40 mins until risen and browned.


Serve with low fat icecream or cream or low fat crème fraiche.
Posted by Oonah at 14:45 1 comment: Links to this post