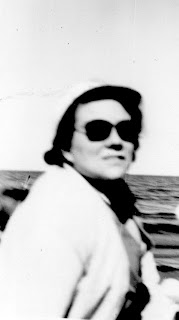 Looking HOT in this cool snap; on the beach -- at Portrush I would think...
My mother never got to do glam much! She worked in service. Then she had too many weans -- 10 of us altogether in two batches -- the big 4 and the wee 4 (which included my nephew). Three sisters, May, June and Eleanor, died in the war years. She could never after listen to Over the Rainbow. (prefered Boy George to Judy Garland any day.)
I know for a fact that somewhere in her capacious bag on this particular day she would have had at least three pairs of navy knickers! Well -- we were quite young still and the sea at The Port never warms up -- with inevitable consequences ;) I wrote about it in my poem in The Sea...
All proceeds to RNLI

Mammy was always either 'deaved' or 'doiled' -- sometimes both at once in which case you stayed out of the way! I believe 'deaved' is derived from deafened but nobody I know can tell me the etymology of doiled. It may be an Irish derivative or lowland scots or just a Braid dialect word for fed up to the back teeth!

She was a good mother but then -- she had little choice but be a good mother -- in her day and in her situation in life. I know because she told me, in one of the few times we spent alone together, (it was a busy household) that she would have loved to be a writer and that her favourite subject at school was English composition. She was good too! She had imagination. (great fan of StarGate btw). She regularly beat us at scrabble and she did crossword puzzles into the wee hours (and doodled pussycats on the wallpaper by her chair -- though I am not supposed to let that cat outa the bag) and on all the 'O's in the newspaper and anywhere she felt the need to draw pussycats :) She always appreciated what I wrote -- what little she saw of it.

When I was little I was afraid of everything and so she used to lure me to the kitchen with praise -- I was the only one who could help her with whatever she was baking or cooking, so that my sisters could watch the scary stuff on TV in peace and I would feel 'special' rather than deprived. She was a clever woman! and a good plain cook who made a little go a long way for a big family but she excelled at buns and Bannock! Sometimes, looking back, I know she must have felt that her life was just one great big mealtime! Parsley Buns/Bacon Stew/Mince and tatties/Broth,Broth.Broth/Lentil soup//rhubarb and Ginger Jam//Homemade Marmalade. CHAMP
She didn't eat eggs and she wouldn't even cook lamb -- couldn't stand the smell of it. And I won't say she never complained but she got on with it. And when my father died she got on with it. And when money was tight she got on with it! And I don't think any of us really knew her pain. She always seemed emotionally robust to the point of being a bit cold and she was certainly physically robust because despite all that child-bearing and stress, she lived to be 89.

My mother took us to every church in the town at some point -- just the once -- just for the experience. I think that is an unusual and very open thing to have done but particularly in an Ulster setting and when she took us to the Catholic Church one of the priests there said 'Hello Mrs, Kyle' as if we went there all the time. That was my mother -- got on with life and got on well with everyone.

Her name was Agnes and our next door neighbour was Senga McQuillan, hence this poem title! AGNESENGA
People on our street were neighbours, We had and were GOOD neighbours and I can't tell you sad it makes me that the area we grew up in is now described as a catholic area! It was a very happily mixed area when I was a child and we all got on well. That is a step in the wrong direction. My mother would have thought so.

She was a woman with a quick turn of phrase and a most infectious laugh. She would laugh if anyone fell or slipped on ice. I remember her once sitting laughing on the pavement when she herself had slipped even though it hurt! And one day when she reached into her shopping basket and realised she had brought the teacosy and not her woolly hat :) she just creased up. She had a lovely singing voice rather like my sister Christine's.  And she could make you feel ten feet tall or smaller than the average bacterium with just a look or a word. She could be strict too -- got rid of the TV when I was 15 to make sure I attended to my studies.

I have written a few times about her before and no doubt will again:
OUTSIDE AND BLOWING BUBBLES

She kinda featured in all our lives, you know...

I am certain she would hate this tribute but she deserves recognition and I would not be who I am if I did not have such a strong woman, such a disciplined, open-minded woman, such a psychologist
for a mother.
Posted by Oonah at 04:38 2 comments: Links to this post