Memories are strange things. They are individual, specific and selective. My sister once pointed out to me that one of my 'memories' was false ie: it never actually happened. In fact I dreamt it and even though the entire household apparently got me back to sleep, I had no reccollection of ever waking up and so the 'memory' persisted for years and I actually wish it hadn't. But I was a sensitive child and always a bit lost... I mean I used to have nightmares after watching Twizzle or Doctor WHO.

These photos provide a background for snippets of what I think I remember about people I knew and some I never met -- but I wouldn't rely on their veracity.

To begin with there were my parents. That's how we all begin after all. Here they are. 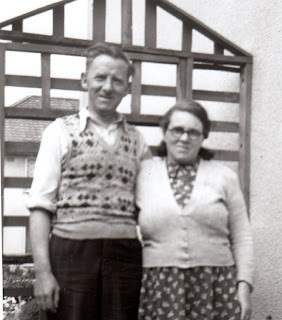 Of course I never met these two people in this photo because it was taken around 1950 and I was not yet born but I remember that gate, the house in the background across the road from ours and yes I vaguely remember two faces not much changed from these. But you see how it is... I didn't know either of these people or how they were with each other. But this is more or less how I remember my father... Apparently he had ginger hair but I don't remember that. He was a plumber. She looked after us.

I got to know my mother quite well. She lived to be 89 and died in 2003. But Daddy died aged 48 when when I was just 5 years old. I wrote this poem aged 18 and it was published in The Braid magazine and Mammy really liked it so I can be sure this at least is fairly accurate.


I remember a man who used to live


at our house when I was a child;


a smallish man who used to wear


that I would twiddle when he nursed me;


He used to call me


I sat on his knee at dinner time each day


and I would kiss his cheek because


He took me to school each morning on his bike;


trousers held firmly to his legs with large black clips,


a cloth cap on his head.


Each Sunday we all went with him


eating our way through sermons, hymns and prayers


which were his favourites.


And then there were the walks;


or in early spring -


Time dims the memories that remain,


just as it dimmed the loneliness and pain


felt by a child


too young to understand.


There’s no place now for sentiment or tears.


I’ve no tears left to shed.

This one was a runner up in The Binnacle Competition: 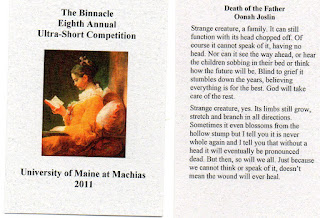 Another memory recently published in Silverbirch is Last Goodbye

I do not think I dreamt that. Why would I dream something so mundane?

In fact I have written lots about my dad. When your life suddenly changes on one particular day forever, especially at such a young age, it tends to stick with you.

I have written much less about my mother but one of my favourites is AGNESENGA
and Room for Living was published in The Shine Journal but that is no longer available online as far as I can see. I am currently revising some poems for publication and that will be one of them.
She was a tolerant and intelligent woman and she would have loved to be a writer. She took us once to all the different chuirches of the town just so we'd know what they were like and she was prepared to talk about each one if we had any questions. I think that is rare in Ulster -- or maybe anywhere! She was a clever mother too. She used to get me to help her bake wee buns so the othere could watch Dr WHO or whatever scary thing they wanted. She had plenty of practice of course. There were 7 of us who lived into adulthood and three that died and that's a lot of children and a lot of loss! But I reckon had he lived loong enough my father would have looked like my brother -- 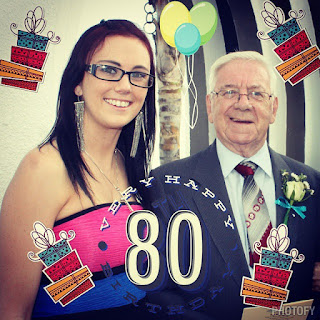 What I remember is that I really loved my dad and he loved me. Maybe that is all that matters.


Posted by Oonah at 05:54 No comments: Links to this post